"Last on the Grass"

By Lisa Valentine - October 29, 2018
Today I am grateful for family visitors over the weekend and a beautiful walk at dusk last evening with Darcy.

Thank you to my brother Lee and his wife Terri for coming to visit and being here for Sam's team's playoff game on Saturday night. It was a win for us and we are on to the section final game Friday night!  It was also a historic game on the field that has been home to Raiders football for over eighty years.

It was the last game played on the grass. It is being replaced with turf. I thought about that as I soaked and scrubbed Sam's dirty uniform yesterday morning. There's something I can appreciate about real dirt on a football uniform. And there's also something I won't miss next year.

Todd Field at McNamara Stadium started out as a limestone quarry and city dump. Part of the stone walls and seating were constructed as a WPA project in the 1930's. There was even a tunnel under the busy nearby highway for years, allowing safety for those coming from the high school across the street. The tunnel was closed off in 1980.

Here are a couple of pictures of the field over the years. The first picture is from 1934, the second, taken via drone, was from 2017's Homecoming game. 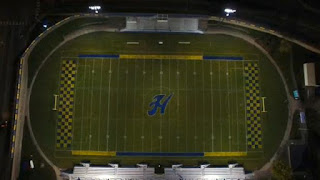 Some things change. Some things stay the same. Am I noticing and giving thanks?

I appreciated being part of history on Saturday evening. I appreciate my own history, the victories and the defeats, and what they have added to the story of my life. I live gratefully today, adding to my own story and a wider story. Seeking to be a positive contributor, a good storyteller.

Links/Blogs That Intrigue Me