How can it be twenty years already?

By Lisa Valentine - October 23, 2018
Today I am grateful for the 74 years of life on earth that my father had, and that the family that meant so much to him is thriving and growing today. I am also grateful for a new day ahead. Sometimes all it takes is closing the book on one day, resting, and awakening to a new set of hours.

It was twenty years ago today that Dad woke up for his last morning of life. How can it be twenty years already? It is hard for me to wrap my head around that. I remember this anniversary every year, but it has hit me harder this year in ways. Maybe because I see Mom, a widow for these last twenty years, declining and getting more ready to let go of this earthly existence.

Here is a picture of Dad as a young man. The date of the photo isn't known, but we figure he was in his late teens or early twenties here. 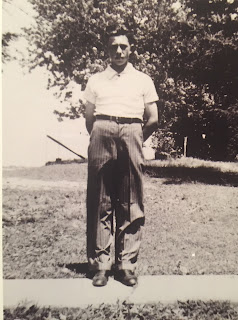 What was he thinking and dreaming?  It's nice to see him dressed up, which he would do when an occasion called for it. I remember him best though in his striped overalls, his daily attire on the farm.

The family time together this weekend, a stop at Dad's gravesite, a mix of emotions, and not surprisingly I felt like writing. Here is the poem that came out. For you, Dad, on this 20th anniversary of your passing.

It was an early Friday afternoon,
and I was delivering a lesson to
a group of sixth graders.
We were interrupted by a message
that I needed to take a call.
Walking down the hall to my office,
a feeling of dread
intensified with each step.

I was about to get my own lesson,
this one on sudden loss.
My brother delivered the sad news.
Our dad had died that morning,
a massive heart attack took him quickly.

Shock kicked in just as quickly.
Gone, dead, his earthly existence of seventy-four years
finished, his gentle voice silenced forever.
Regret came too.
I hadn’t picked up the phone the night before,
deciding to call over the weekend.

Instead the weekend would start with helping
to pick out a coffin, and end with a wake.

There was peace though too.
Dad died doing what he loved,
helping with the fall harvest on the
farm he had worked for decades,
where we had all been raised.
No family discord kept us apart when he died.
Gratefulness found a way in and softened
the edges of grief.

Though slowed by aging, he had still been fully alive.
A continued decline in health would have been
relentless for him to endure,
and so difficult for us to witness.

Still there was the pain, the sinking in of reality.
Arriving home to embrace Mom, newly widowed,
and other family members who had gathered.
The first hours and days surreal.
Waking up and for a minute forgetting
what had happened, then the tears
and grief hitting in waves.

Twenty years have gone by Dad.
Your death was sudden.
The memory of hearing the news
remains vivid, the grief not as.

Your mark on the world and those who knew you
is lasting, indelible.
Your legacy is strong, your family growing.
Memories shared keep you from fading
from our minds and hearts.

Twenty years later, you live on in each of us Dad.

Links/Blogs That Intrigue Me